OpenFaaS functions can be triggered easily by any kind of event. A small piece of code will convert from the event-source and trigger the function using the OpenFaaS Gateway API.

The most common use-case is HTTP which acts as a lingua franca between internet-connected systems.

Looking to trigger a function on a schedule? Have a look at the Cron page for more information on how to use Kubernetes CronJob and other options such as the cron-connector.

This is the default, and standard method for interacting with your Functions.

The function URL follows the pattern of:

You can execute a function or microservice asynchronously by replacing /function/ with /async-function/ when accessing the endpoint via the OpenFaaS gateway.

The function URL follows the pattern of:

You can also pass an X-Callback-Url header with the URL of another endpoint for the response.

The OpenFaaS connector-pattern allows you to create a broker or separate microservice which maps functions to topics and invokes functions via the OpenFaaS Gateway meaning that the OpenFaaS code does not need to be modified per trigger/event-source. 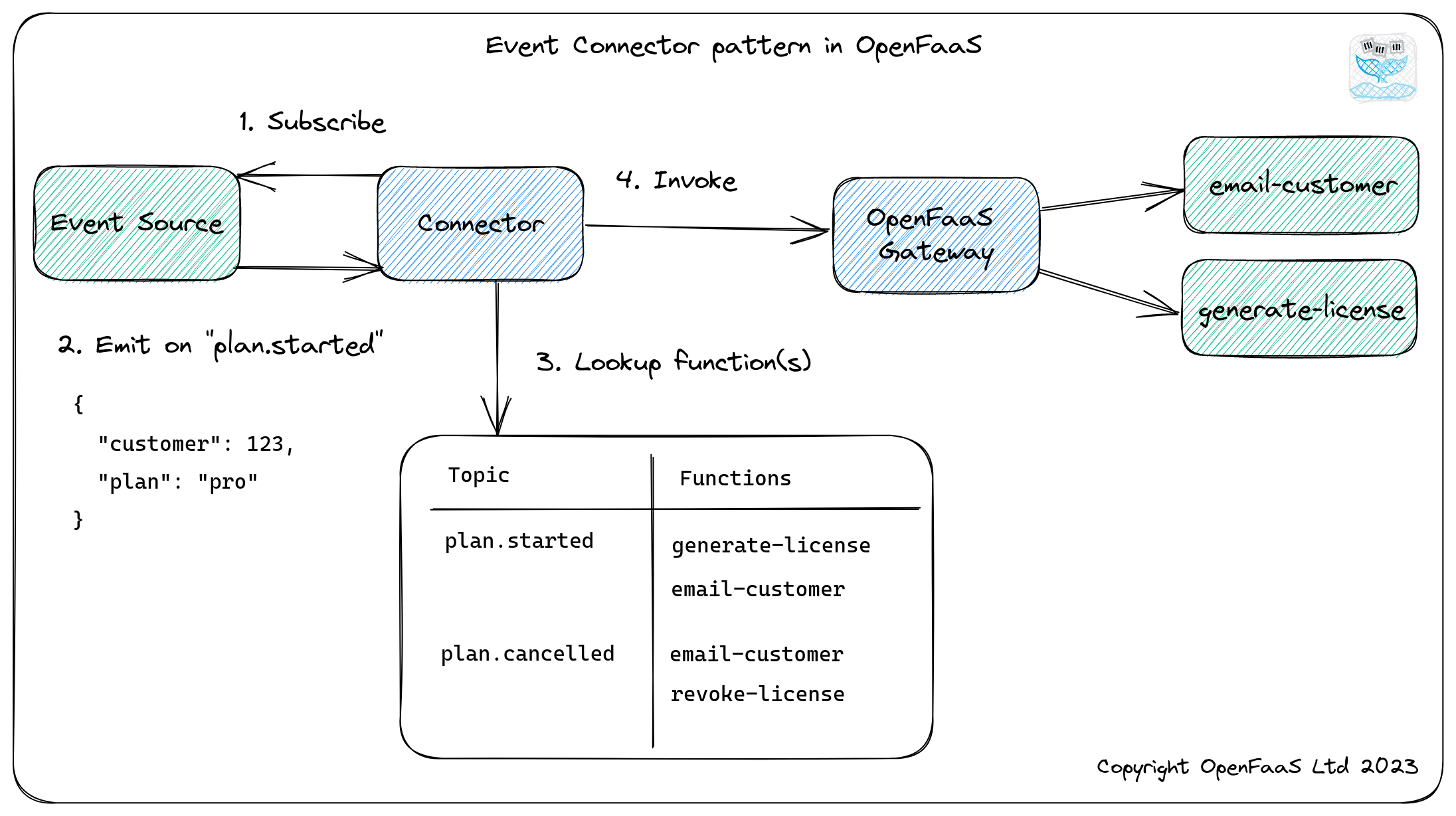 Add your own event source¶

If you'd like to add an event source which is not listed below you can fork the OpenFaaS event connector SDK which is written in Go and use this to connect your pub/sub topics or message queues to functions in OpenFaaS.

The cron-connector is an OpenFaaS event-connector which can be used to trigger functions on a timed-basis. It works with all OpenFaaS Providers.

The MQTT Connector can be used in conjunction with an MQTT broker such as emitter.io or similar to respond to events from IoT devices and MQTT message producers.

OpenFaaS has a built-in queue system with NATS Streaming, however you can also invoke functions using the pub/sub mechanism of NATS.

CloudEvents is a specification for describing event data in a common way.

Follow this example to learn how to trigger functions using the Azure EventGrid and CloudEvents.

More information in the repository: johnmccabe/cloudevents-slack-demo

You can use AWS SNS to trigger functions using AWS SNS Notifications and Subscriptions. This approach can be used to export almost any data-source or event from your Amazon Web Services (AWS) console such as S3 of DynamoDB to an OpenFaaS function.

Note: the Redis connector currently has no support for gateways using Basic Authentication, but this is being worked on by the author.

More information in the repository: Templum/rabbitmq-connector

You can trigger OpenFaaS functions using webhooks sent via the (if this, then that) service.

An example may be triggering a function which forwards Tweets about your brand or project to a given Slack channel. For this combination use the "Twitter search" Applet and have it trigger the "Make a web request" Applet giving the public URL of your OpenFaaS gateway and the receiver function such as https://gw.my-company.com/function/slack-forwarder

See an example of a function built to forward Tweets from IFTTTT to Slack using Golang: filter-tweets.

The vcenter-connector by OpenFaaS is an event connector built to consume events from VMware's vCenter product.

With this project your functions can subscribe to events generated by the changes in your vCenter installation - for instance a VM being created, turned on or deleted. By using the connector you can extend the behaviours and functionality of vCenter and create custom workflows for your platform.

Status: under active development, available re-packaged from VMware as "VEBA".