If you have seen the error message above in your web application, this is the correct page to have a look at. This error is related to a topic called Cross-Origin Resource Sharing (CORS).

First of all, you need to know that browsers have a policy called the Same-origin policy for security reasons. Under this policy, a script inside a web page can access other web page's data only if they both have the same origin. An origin consists of URI scheme, host name, and port number. This means, a script inside http://example.com can only access data within the same origin such as http://example.com/users. Trying to access data in other origins such as http://sample.com/users will lead to a violation error. You don't want arbitrary scripts sending to or retrieving data from malicious web sites so the Same-origin policy plays a very important role in order to protect you from these threats.

Despite the pros, there are situations where the Same-origin policy gets in the way. What if you wanted to develop a Single Page Application locally and access data via OpenFaaS functions? Often, developers get stuck with an error telling you that you don't have a Access-Control-Allow-Origin header present. This is because your local web server and the OpenFaaS gateway have different origins as illustrated below. 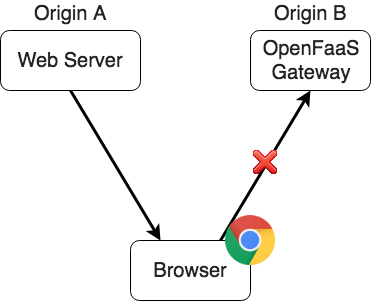 Using Reverse Proxies as a Workaround¶

Mainly there are two ways to deal with this problem. Either set a CORS header (which is not covered in this page) or make the browser think it is talking to the same origin using reverse proxies. If you place a reverse proxy inside or in front of your web server, you can route specific requests to specific targets. For example, you can route all ajax requests in your web application which start with /api to the OpenFaaS gateway by proxying it from the web server as illustrated below. 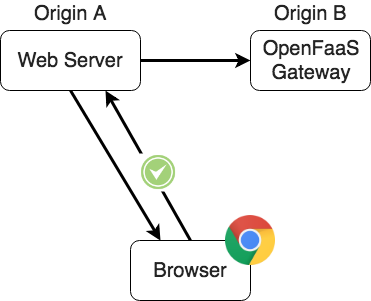 This way, the request from the browser doesn't violate the Same-origin policy and under the hood, would be proxied to the OpenFaaS gateway.

An Example with a Vue.js + Webpack Application¶ 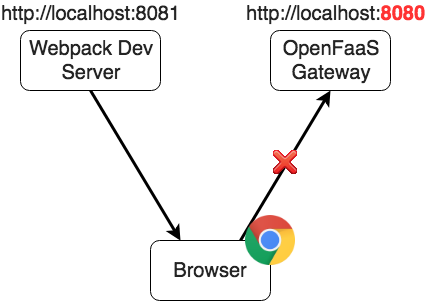 Here's a quick view of the code trying to call the echo function from the Vue.js application:

and ends up with the following error:

Failed to load http://localhost:8080/function/echo: No 'Access-Control-Allow-Origin' header is present on the requested resource. Origin 'http://localhost:8081' is therefore not allowed access. If an opaque response serves your needs, set the request's mode to 'no-cors' to fetch the resource with CORS disabled.

In order to solve this problem, we'll need a reverse proxy to proxy the request from the webpack dev server to the OpenFaas gateway. Luckily, the webpack dev server has a built-in feature for this by taking advantage of the devServer.proxy feature. You can simply write a definition as follows in your webpack configuration:

With this, all your requests starting with /function will be proxied to the gateway (http://localhost:8080) which is exactly the behavior we want. The following diagram shows how the data flows. 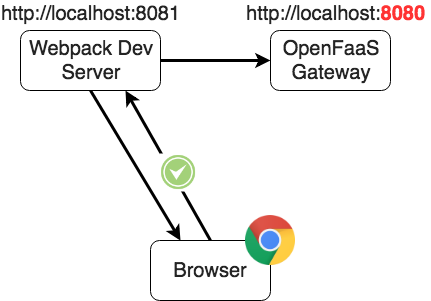 Now that the requests would be proxied, the previous code will look like this:

Which will end as a successful request.